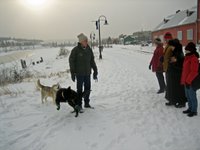 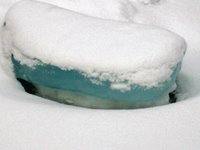 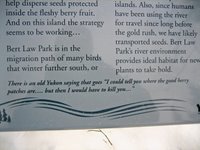 Remember, if you want to see a larger image - i.e., to read the "fine print" - click on the picture.

When you’re on a journey like this, great reading is essential. Especially when you’re way up north here and it’s night for a really long time. One book I chose is an old favorite and I’ve read it many times. It’s called The Snow Leopard by Peter Matthiessen and it was first published in 1978. It’s introspective and thoughtful and it’s about a long journey in a cold climate – perfect reading for an adventure like this.

I also brought along a book about sled dog driving that I’d never read before. I’ve read a whole, whole lot of books about sled dog driving, both about the Quest and about the Iditarod and just general books about being around sled dogs. But this one was written in 1990 by a Scottish guy named Alastair Scott. The title is Tracks Across Alaska: A dog sled journey and it’s been a real treat. He’s taking a long trip up to Alaska, similar to mine but about ten times longer and he’s getting a dog team together and mushing them eight hundred miles in thirty days or so. Early in the book someone is asking him why he’s taking this trip, a question I ran into a lot before I left – even while I’ve been on the trip. He says "I found it hard to reply because it seemed that anyone who had to ask the question probably wouldn’t understand the answer." Which is exactly the response I think is appropriate.

He has one quotation in Chapter 20 – actually the quotation is Chapter 20. I am particularly fond if it. It’s credited to Henrik Ibsen, "(Quoted in Sir Vivian Fuchs, Of Ice and Men)." Anyway, this is the quote: "There is always a certain risk in being alive, and if you are more alive there is more risk." Absolutely perfect.

Also, when I was driving up to Pelly the other day, I stopped in a little village called Carmacks to top up my gas tank. I went in the general store to pay for it and they had a little bookshelf and I found a little copy of The Call of the Wild and Selected Stories by Jack London. I could hardly pass that up on an adventure like this. I took it home and immediately read To Build a Fire and The Call of the Wild. To Build a Fire will make you a little bit nervous even on a comparatively tame expedition like this one. The book had an introduction by Alex Kershaw, a biographer of Jack London. In the introduction Kershaw quotes London as saying "It was in the Klondike that I found myself. There, nobody talks. Everybody thinks. You get your perspective. I got mine." I’ve definitely been getting a lot of perspective while I’ve been here.

When I was over at Muktuk earlier this week I picked up another book. It’s called Treat People Like Dogs! Six tasks for passionate leaders and the author is Robert Norton. He’s a management consultant and he was so impressed with the organization and functioning of Frank Turner and Muktuk Kennels that he used it as a model for working with people. It’s a pretty fascinating book.
This morning we took our long walk down the river (what a surprise). There was a group from Switzerland pretty close to the hotel and they were all taking pictures of each other so I asked if they’d take one of my group – and that’s this picture. I have no idea what Nicky is doing in this picture; we had just gotten outside and he was wildly excited. He loves these long walks. About a second before that he had been over there leaning against the people who were standing there, schmoozing and begging for attention. Perhaps his antics were a further ploy for attention.

Anyway, we headed down the river and this time I took my GPS with me so I could figure out how far the walk was. We added the walk around the little park on the island again today and it came out to almost precisely 4.5 miles. This unusual looking blue thing was lying on the same frozen riverbed I posted a picture of yesterday. It was lying in a large expanse of unbroken snow so there was nothing to use for perspective but it was around the size of an attaché case. It was just a big giant block of ice that had been broken out of the river somehow. I thought it looked pretty amazing. It’s a little bit grainy because I used the zoom lens to bring it in a little bit closer.

The little park on the island is called "Bert Law Park" and yesterday I mentioned a sign on the island. The big sign says "Temptation Island – the berries of Bert Law Park" and it talks about the ones that are okay to eat and the ones that are poisonous. The little saying at the bottom just cracked me up. Here I am in the frozen north, deep in the Yukon and I find the origin of the phrase "If I told you, I’d have to kill you." Who knew?

When we were walking back up the river – that’s north – I felt compelled to cover my face for the first time on this trip. When we walked out of the hotel it was -4º F (-20º C) and the wind was blowing out of the north around 4 mph (6 kph). When we were walking downstream it was at our backs and I didn’t even notice it, and when we were walking around Bert Law Park we were in the woods so we didn’t feel it. But when we got out of the park and started heading back up that river with the wind right in our faces, I definitely began to notice it then. My coat and hat and jeans and gloves were plenty comfortable but at -4º F, even a 4 mph wind turns your face to a block of ice in pretty short order. You definitely see why lots of guys wear beards up here. Also, I was gratified to see for the first time that many locals were wearing face masks today.
Anyway, another fun walk. This afternoon I’m going to the Yukon Visitor Reception Centre to watch a movie about the Quest called "The Lone Trail."

Have a great day,

Jay, Ivory and Nicky
Posted by Jay McLaughlin at 16:31

keep in mind i'm a techno weenie. just tried a post ... it may have wound up an e-transmission.

this is an epic adventure, jay. via your posts i am reading heroic stuff.

hope you & them stinkin dogs are safe. it sounds like you are having the time of your life. i fell days behind and just caught up on your "diary". your mention of jack london's call 'o the wild & to build a fire took me way back to my childhood. can't wait to hear more about your great views, personable experiences and bitter cold travels.

cathy says hello, sends her love. i have a ticket for you to join me & some pals, guys night, to hear a bluegrass band play at a nearby dive on 03/16. hope you are back and will make plans to be available.
cris leonard