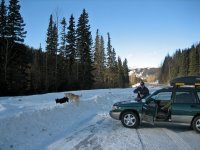 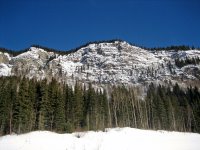 Two images from a lunch break today in the middle of God-knows-freezing-where. Pat made great sandwiches. Click on the pictures for bigger views.


Did this last night in Prince George, British Columbia:

After a long haul today from airport, where I picked up Pat after his 1230 arrival. And we left for here and now it’s late; our mileage is 115,498 and our elevation is 1,982’. And the car is parked at N53º54’29.0” x W122º46’47’7”. You drive for miles and miles up here and basically don’t see a thing and suddenly you come to these big, busy towns with tons of people and what appears to be lots to do. But it’s late and we’re leaving early and I still haven’t walked these dogs so until later,

It went down to around 12º F on the drive up here but when we got into town it was around 19º. We're going out for some food now.
Posted by Jay McLaughlin at 23:32

Glad all is well! The Pictures look great! Stay Warm!!

You look great (as usual). Things are boring here w/out you. Keep up all of your good work. You are a regular Ernest Hemingway!
Love,
Jody