If the reward for virtuous living… 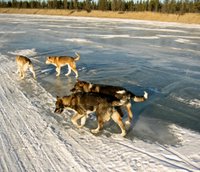 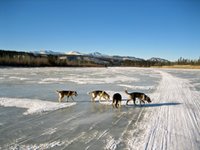 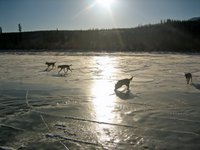 …means spending Eternity walking four puppies on a frozen river, I’ve committed my last sin. It was the most joyful thing I've ever experienced.

The dogs and I got up at 6:00 this morning because our schedule is busy today. The sun doesn’t come up here until after 8:30 so it’s very dark at 6:00. The dogs had breakfast and I had breakfast and we went out for a long walk down the Yukon. At least here in Whitehorse, the Yukon isn’t frozen all the way across, so you walk on the banks – not on the actual river itself. I was going to be leaving the dogs in the hotel for a couple of hours so I wanted to get them good and tired and we walked out of the hotel at 8:00 and took a fast paced walk for over an hour. When we got outside it was still pretty dark and it was 7º F or -14ºC. It was a beautiful morning for a walk and that was the first time we’ve gotten to watch the sun come up. They had a great workout and I left them at the hotel while I headed back up to Muktuk.

Yesterday while I was up there they told me that if I came back today at 11:00 I could "walk the puppies" and it was an offer I wasn’t about to refuse. You only live once. The pace is slow at Muktuk right now because a lot of the people are up at Dawson helping out and enjoying the Quest’s mandatory 36 hour layover there. But the puppies need walking every day and they let me take out four great little pups who were born on September 1. They gave me a handful of snacks and told me to be careful of my gloves and so forth – puppies are puppies and they like to play and it was easy to imagine loose articles of clothing ending up being hidden in the woods somewhere. They just told me to head down to the river (the Takhini River surrounds Muktuk on three sides) and walk them for an hour or so. One of the guides told me if we weren’t back in an hour and a half they’d figure the puppies had probably eaten me and they’d send out a snow machine to find my remains.

So the puppies and I get down on the river and it’s 9º F (-13º C) and it’s absolutely the most spectacular day you can even imagine. I’m not very good at estimating distances but I would imagine the river is around a quarter of a mile from bank to bank in that area. We started out in the shade and there’s some snow on the surface and that gives you some decent footing but when we come out into the sun, the snow’s all blown off. And you’re more or less walking on a giant skating rink, but they’ve driven a snow machine up and down it and that’s where they mush the dogs so you have some traction there. Of course, the puppies don’t much care about that and they run all over the river, up and down the banks, back and forth across the surface of the river and they’re just so, so, so incredibly alive it absolutely takes your breath away. One of them will find a stick or something interesting frozen into the surface of the ice and stop and start wagging his tail and the others will race toward him to see what it is and go sliding by, backpedaling and trying to keep their feet. Some places the ice is frozen so hard and thick that you can look down thin cracks in it and it must be eighteen inches thick or more – you can even see the rocks on the bottom of the river.

I figured I could walk them for thirty five minutes or so before I had to turn back so that we’d make it in time. And when I looked at my watch and it was time to head back I just hated to go. I could have spent the entire day out there. I wished I’d brought Ivory and Nicky with me – I know they would have enjoyed it too, although not quite as wildly as those puppies. If Nicky really decided to take off and go for a run on the groomed part of that ice, it would have been fun to watch those puppies try to keep up with him.

I took over fifty pictures today and it was really difficult to decide which three to put in this post. I regret to say that I was never really successful getting all four puppies to "pose" together. If you’ve ever had any success getting four exuberant puppies to stand still at the same time outdoors on a beautiful day, please don’t hesitate to send me a few pointers.

I put one picture of the four of them just running around on the ice with the sun behind them – I thought it was a nice picture. Another image is kind of a long view of them, looking back up the river with the mountains rising in the background – another image I enjoyed. A third picture is the closest thing I had to a "close-up" of the four of them – the only other time they all got near me at once was when I would pull treats out of my pocket and they’d all be going crazy on the ice right at my feet for as long as it took them to scarf down a few snacks, then they would bolt back out across the ice in search of more adventure.

Anyway, just another day of fun in the Great White North.

Have a great day,

Jay, Ivory and Nicky
Posted by Jay McLaughlin at 18:57